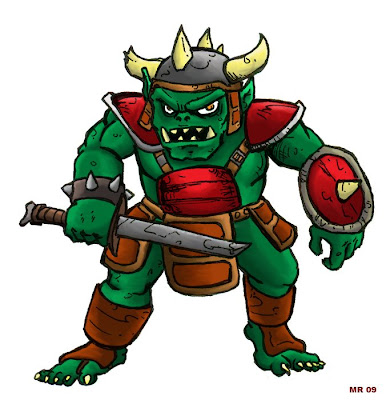 Goblins were originally household spirits in European Pagan belief. "Goblins" went by many different names - Hob, hobgoblin, brownie, nixie, tomte, etc. Generally, such "faire folk" were helpful around the house unelss offended, by which they would then perform pranks and mischief. Such a belief in household spirits may have evolved from ancient ancestor worship.

Modern fantasy fiction has recreated the Goblin into a small, pig-like, gruntish humaniod of limited intelligence. Generally they tend to swarm by the thousands, are the antithisis of Dwarves, and tend to fall under the command of beings more powerful than themselves (wizards, demons, etc.)
Posted by Hawanja at 8:29 AM