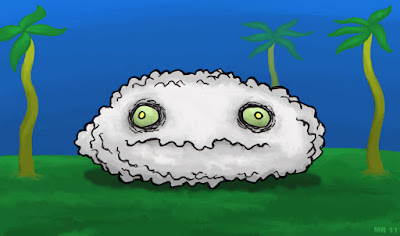 Strange, animated clumps of plant-like material. Fluffs are generally peaceful unless attacked. They will fight to the death to defend their young.
Posted by Hawanja at 10:18 PM No comments: 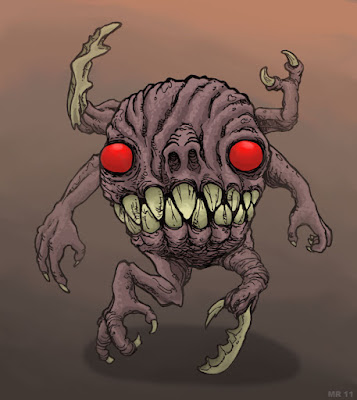 Dominatorites are animate, mindless killing machines used as shock troops and assassins by greater demon lords. The creatures are barley sentient, able to only obey the most simple of commands. They must be continuously fed, as if they are allowed to lapse into hunger for too long the will eventually go berserk and attack anything within reach.
Posted by Hawanja at 9:52 PM No comments: 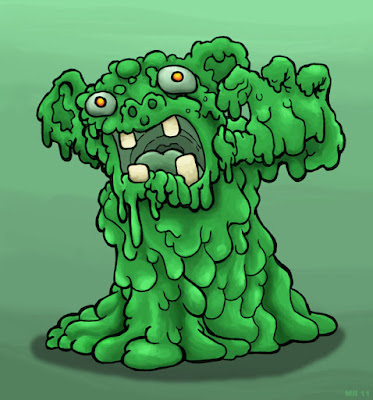 Freakish simian monstrosities which live in deep, eldrich swamps. Slime monkeys are capable of appearing nearly indistinguishable from the surrounding muck and pond scum, allowing them to ambush the wary traveler.
Posted by Hawanja at 7:49 PM No comments: 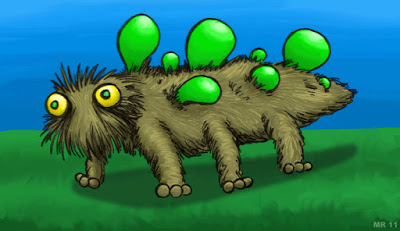 Figziggles are small, caterpillar like beings who live in shallow burrows in savannas and grasslands. The green sack-like organs along it's back are used for long term food storage so the creature can survive the long winters of it's native environment.
Posted by Hawanja at 9:40 PM No comments: 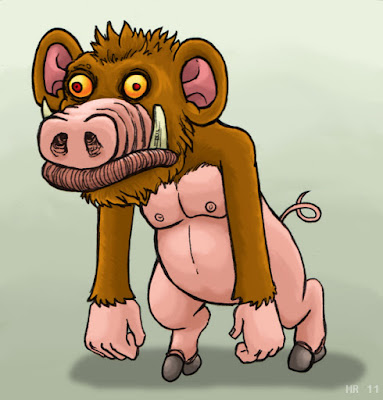 Pig Monkeys are bizarre misfits of science, the first step of a misguided experiment of splicing simian and porcine DNA, with the eventual goal to create pigs from which human organs could be harvested. The resulting monstrosity proved to be an ecological disaster, and are actively hunted down and shot on sight.
Posted by Hawanja at 8:31 AM No comments: 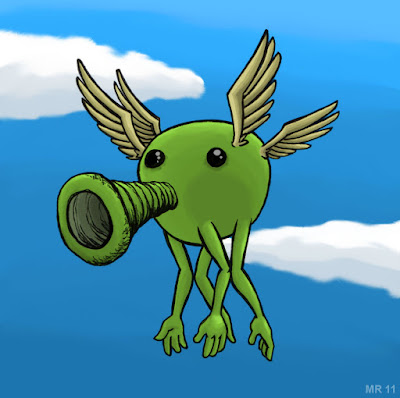 Floobighs are sentient, otherworldly creatures which live in the upper atmosphere. They communicate through their large, funnel-like organ with a language that sounds like a series of barks, blerts, and trumpets. They are highly intelligent, and often enjoy long conversations regarding philosophy, morality, and the creatures who live below him.
Posted by Hawanja at 8:33 PM No comments: 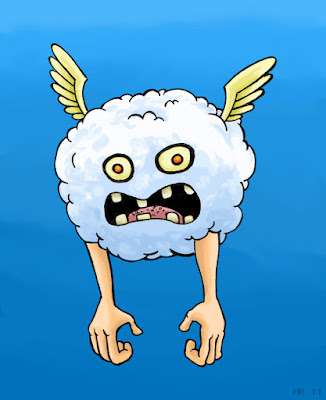 Strange entities which take on the appearance of clouds. Their bulbous bodies actually contain inflatable organs which function as gas bags filled with a lighter than air gas to keep the creatures aloft. On a clear day they can appear almost invisible to prey on the ground.
Posted by Hawanja at 6:31 AM No comments: 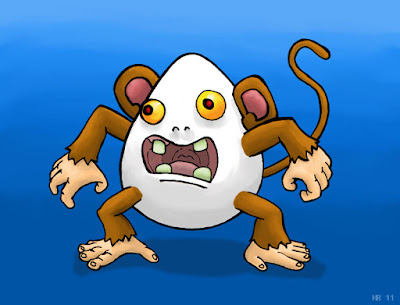 Egg monkey sat on a wall
Egg monkey had a big fall
Egg monkey did a full quartered barrel roll and walked it off like a boss.
Posted by Hawanja at 6:14 AM 2 comments: 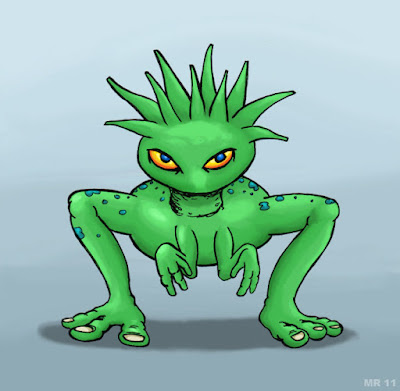 Giabolites are bowlegged amphibians. They live in large cities made up of underground tunnels and communal spawn tools. The creatures have no mouths, but use the tendrils on their heads to extract nutrients from soils and water.
Posted by Hawanja at 12:13 AM No comments: 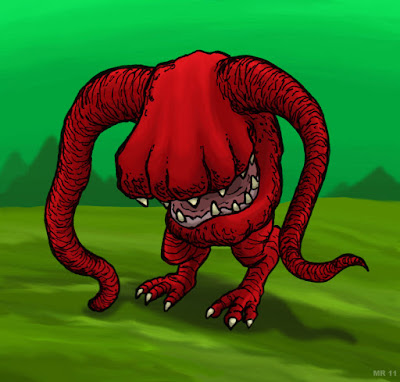 Distant relatives of the Whipped, the Skyvywhip fills a similar ecological niche. Evidence suggests the creatures are far more intelligent than it readily appears.
Posted by Hawanja at 12:03 AM No comments: 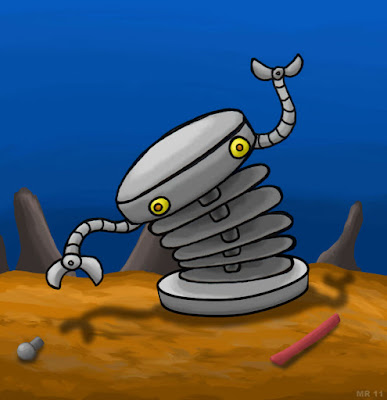 Squanches are primitive mechanical things which have evolved in a vast area of the galaxy used as an interstellar junk yard. Once millions of years ago a ship crashed on a far away planet, and all hands were lost except for a pair of standard maintenance drones. The drones used parts from the ship and local raw materials to keep themselves repaired and to build further drones. Eventually as other races began dumping their outdated hardware the number of drones grew. Squances can be made of any number of bits, parts, or junk. They have a rudimentary programming very much unchanged from their maintenance drone ancestors, and have been known to generously help stranded offworlders.
Posted by Hawanja at 6:47 PM No comments: 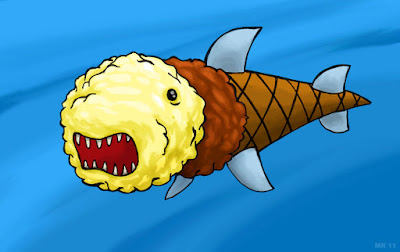 Massive predators of the deep blue sea, spawned from ice cream cones. The creatures have to stay in Arctic waters or risk melting.
Posted by Hawanja at 12:16 PM 1 comment: 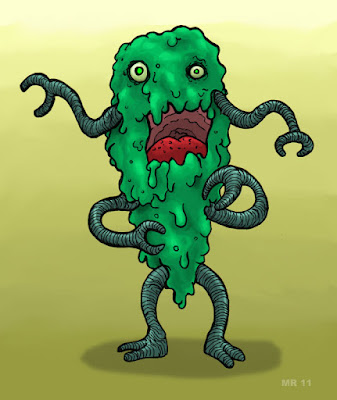 Near the outskirts of the galaxy is a system made of up several barren rocky planets which have been used as an intergalactic dumping ground of highly toxic materials for several large interstellar civilizations. The creatures known as Spooglies thrive in the slime, filth, and toxins which other creatures dispose of. They have since expanded their influence over nearly the whole galaxy. They can typically be found as sanitation workers on nearly all integrated planets.
Posted by Hawanja at 11:36 AM No comments: 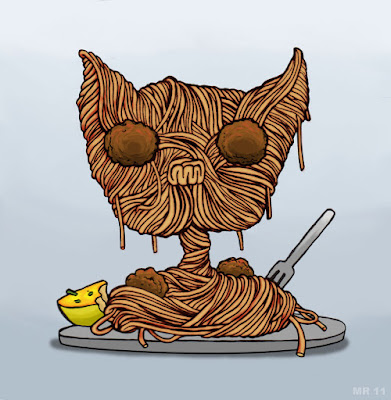 I weep for you.
Posted by Hawanja at 5:19 AM No comments: 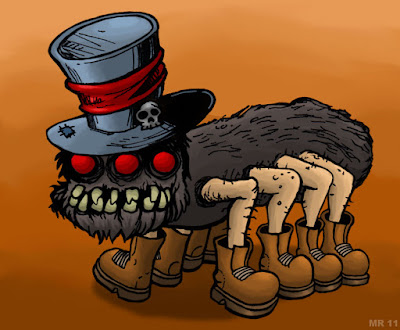 The creature who would be known as Dr. Arachnid was formerly the leader of a funk/soul band called "Professor Funk and the Incomparable Twelve." They did five shows a week in a dozen cities a year and never failed to pack the house. During one particularly heavy jam session the good doctor accidently ingested some contaminated radioactive curly sauce and found himself mutated into an eight legged, spider-like form. The band was renamed "Dr. Arachnid and the Houseflies" and continued touring. The doctor himself ends the set with an extended dual guitar solo with his eight arms.
Posted by Hawanja at 12:06 AM No comments: 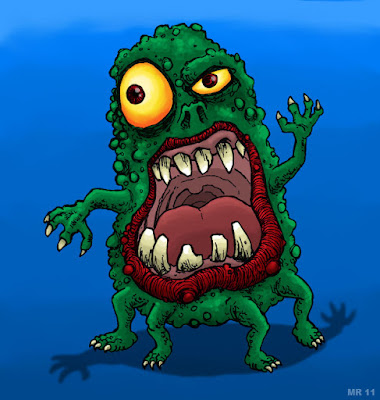 Phugglywumps are small, ugly, lumpy creatures covered in warts and welts. They are highly selfish and egotistical, and tend to judge others by their own standard of beauty.
Posted by Hawanja at 6:33 AM No comments: 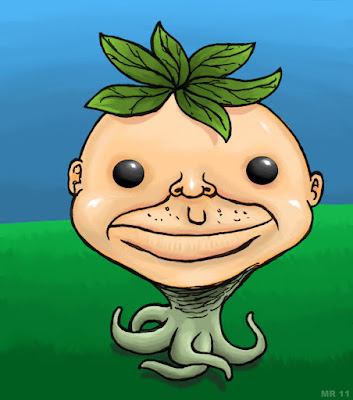 Radipishes are plants genetically engineered with human DNA. The original goal was to create a plant based form of insulin which could easily be harvested. However the resulting chimera gained a human level awareness. The Radipish were originally heavily exploited and experimented on, but have recently won a landmark court cases which guarantees them equal treatment under the law.
Posted by Hawanja at 6:35 AM No comments: 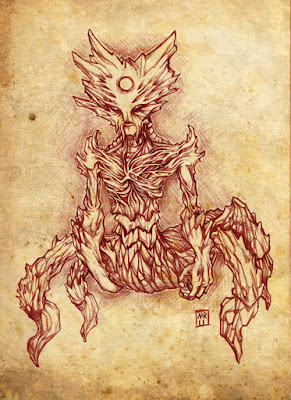 Sonneillon is the demon of hate, formerly of the order of thrones, and the adversary of St. Stephen. He tempts men with hatred against their enemies. 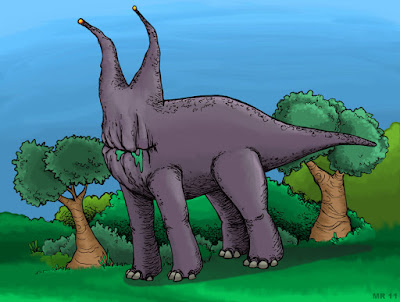 The Slugplodicus is a massive, mollusk-like saurian recently discovered in deep South Asian jungles. The creatures are massive, measuring up to 40 feet from toes to the tip of the eyestalk. They are generally peaceful, but will aggressively attack any threat towards their young.
Posted by Hawanja at 11:13 AM No comments: 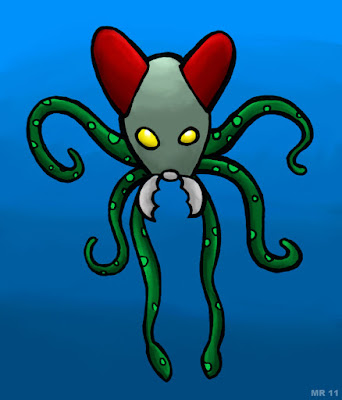 Tscxochlix units act as mid-commanders and lieutenants for the Xennon overlords. They will often be placed at the back of an advancing attack wave to give psychic orders to their underlings, but will attack themselves if the opportunity presents itself.
Posted by Hawanja at 11:33 AM No comments: 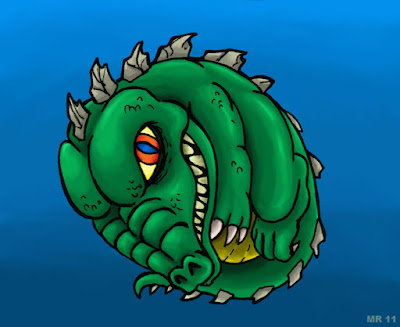 Lizard Balls are reptilian creatures which have developed a peculiar way to hunt. Their short legs are not conducive to chasing down fast moving prey. However they have been observed to curl into a tight ball and roll their heavy bodies into prey to stun them. Lizard Balls can often be observed engaging in very elaborate mating contests, which involve two males rolling into each other at top speed.
Posted by Hawanja at 12:18 AM No comments: 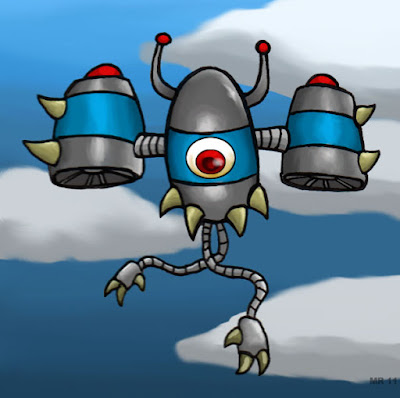 Trywliks are robotic entities which make up the bulk of the Xennon empire's planetary invasion forces. They act as frontal assault troops, recon droids, and decoys. Trywliks are produced in vast factories by the millions and are usually treated as cannon fodder.
Posted by Hawanja at 7:05 AM No comments: 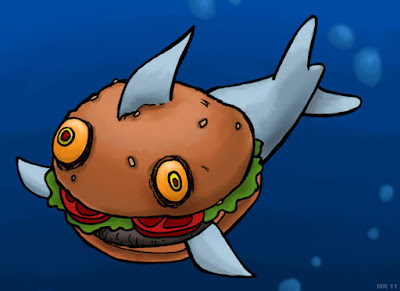 A strange amalgamation of Fish and Hamburger. The Burger Fish was created by fast food scientists. Although they scored high on blind taste tests, most people when told what they were eating found the resulting burger "icky" and "disgusting."
Posted by Hawanja at 12:35 AM No comments: 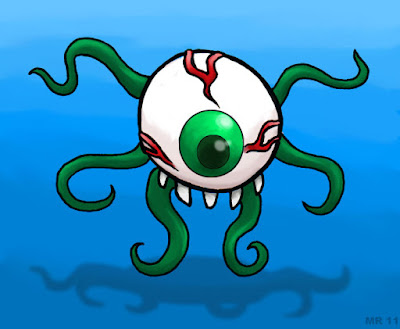 Strange flying mutants created by advanced alien invaders to use as bio-weapons. The EyeSquid shares human, squid, and alien DNA. The creatures are capable of flying via some unknown form of propulsion and firing a devastating laser from their central iris.
Posted by Hawanja at 12:45 AM No comments: 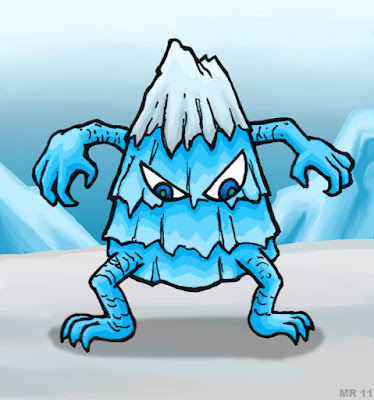 An icy being of the frozen north, FrostBites are living ice elementals. They have the ability to freeze anything they come in contact with, including instantly covering any surface in a slippery icy coat.
Posted by Hawanja at 12:47 AM No comments: 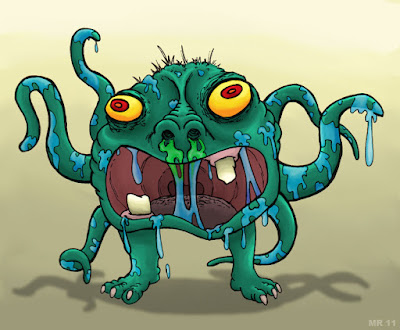 Slobbulous is covered
in saliva and spittle
thus the people around him
respect him but little.
His whole body is sheathed
in bile and drool
so he is often mistaken
for a gibbering fool.
Posted by Hawanja at 12:33 PM No comments: 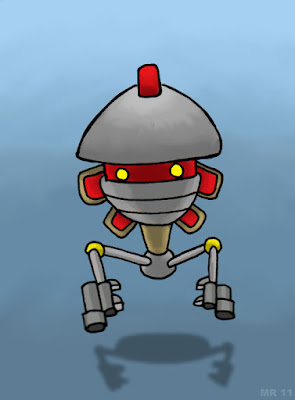 Skiebombers are a unit in the planetary invasion forces for the Xennon empire. They usually act as second tier support for advance soldiers. Their primary function is to destroy important infrastructure targets, such as weapons depots, fuel repositories, etc.
Posted by Hawanja at 8:41 AM No comments: 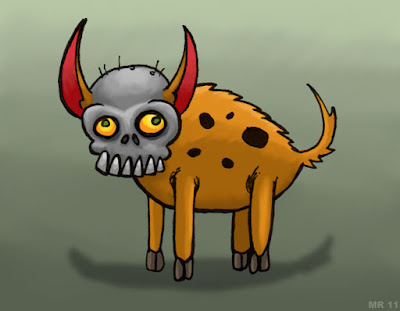 Skull Dogs are artificial creatures, often created by students of magic as a learning exercise. Skull dogs are not truly "alive," but are in fact just animated akin to how skeletons or other automata are. As such they do not exhibit any type of innate animal behavior, but instead will follow verbal commands to the letter.
Posted by Hawanja at 12:13 AM No comments: 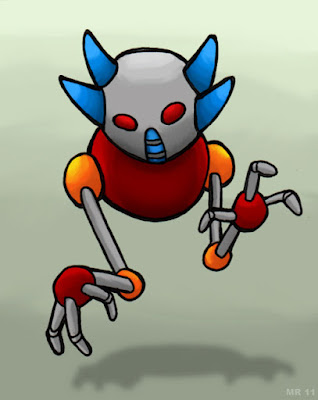 Skvvix commandos are part of an advance attack fleet for the Xennon Empire. Their function is to scout out enemy territory and destroy any important targets of opportunity.
Posted by Hawanja at 12:42 AM No comments: 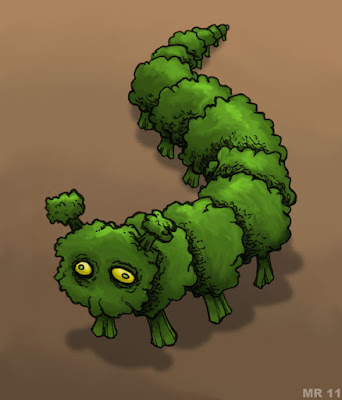 BroccoliPillars are an evolved form of the lowly vegetable which grace the dinner tables of billions worldwide. They came into being shortly after genetically engineered broccoli was exposed to an exotic form of radiation. BroccoPillars are generally harmless.
Posted by Hawanja at 12:08 AM No comments: