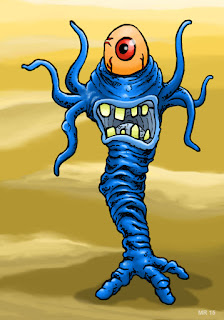 Strange mutations from another galaxy. Occulapoids are a sub-race to the Xarxirix. Eons ago a population of the creatures became isolated in a deep, flooded cavern. As the years passed they diverged physically due to inbreeding and random mutation. When they emerged centuries later the two species had diverged too much and could no longer interbreed.
Posted by Hawanja at 10:21 PM No comments: