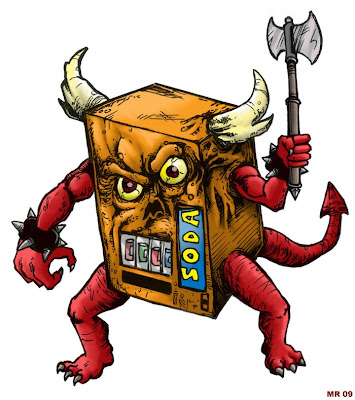 Dorinkuman was a minor demon henchman, with the command of his own small legion. An aeon of repeated defeats in Hell's never ending civil wars have finally taken it's toll on him. After a quick trouncing by the Demon lord Asmodeous he decided to leave hell and recruit souls from the human world. Howerver a mishap in trans-dimensional travel stranded him within an ordinary soda machine.

Dorinkuman now spends his time tempting and perverting humans into his growing hellish army with free soda. It does not seem to be working too well.
Posted by Hawanja at 11:00 AM