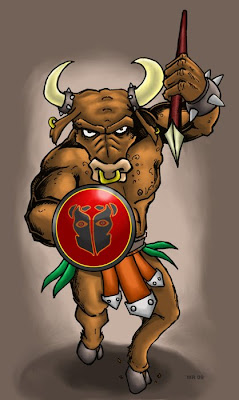 The Minotaur is the hideous offspring between the wife of King Minos and the Cretan Bull, a revenge orchestrated by the god Poseidon. The man-bull grew ferocious and was isolated in a vast labyrinth beneath the palace. Every nine years seven young men and seven unwed maidens were forced into the labyrinth to be hunted down by the Minotaur as sacrifice. The beast was eventually destroyed by the Greek hero Theseus with the help of the Princess Ariadne.
Posted by Hawanja at 7:48 AM