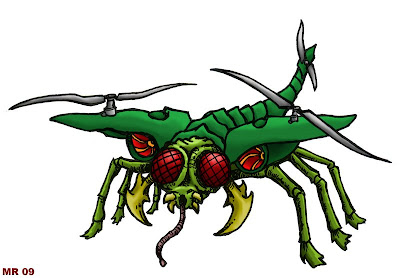 What originally began as an experiment in biomechanics by a gifted undergraduate has had disastrous ecological consequences. The locustcopter is a 10 inch long insect with twin biomecahnical rotary blades that allow it to achieve unnatural speeds. A few escaped the lab and bred in with local locust populations, and now swarms of the flying monstrosity spread from continent to continent, devouring everything in thier path.
Posted by Hawanja at 8:04 AM