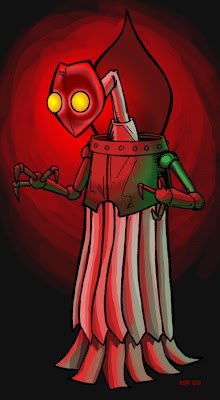 The Flatwoods monster is a strange anomalous creature that appeared near Flatwoods, Virgina on Sept. 12th, 1952. Eyewitnesses describe a 10 foot creature with a green body, large glowing eyes, small branch-like "arms," and a glowing head covered by (or in front of) a heart shaped cowl of some kind. Along with the creature came multiple UFO sightings. Several eyewitnesses also described some type of mist or gas emitted by the creature, and were sick for several days afterward.

What was it? The conventional explanation is that the monster was an Owl - although how someone could have mistaken a common barn owl with a ten foot tall glowing alien monster is beyond me.
Posted by Hawanja at 9:36 AM