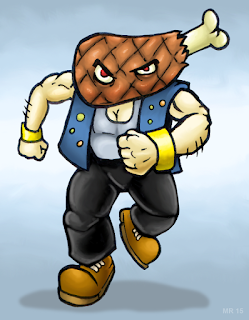 A two bit thug with a record and a bad attitude, Murry "MeatHead" Marconi acted as hired muscle for various supervillians. An accident with a strange matter displacement ray replaced his head with a slab of beef, making his appearance match his namesake. He now sells his super-meat powers to the highest bidder.
Posted by Hawanja at 5:19 PM No comments: