Samael, the Angel of Death 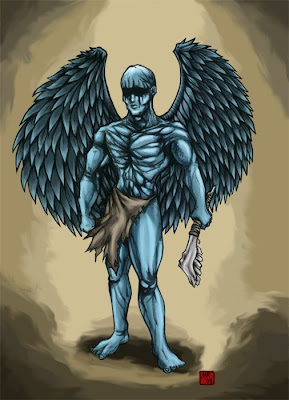 Samael is the name of the Angel of Death in traditional Jewish lore. Unlike most characters from Abrahamic religions he seems to possess both good and evil qualities. Depending on the source he is equated with Satan (tempts Eve as the serpent,) at other times clearly aligned with God (wrestles with Jacob,) other sources such as the Kabballah list him among the Fallen angels.

In this depiction he's armed with an axe made from a jawbone of a mule, and has torn his eyes out to spare himself the grief that his task entails.
Posted by Hawanja at 10:57 AM