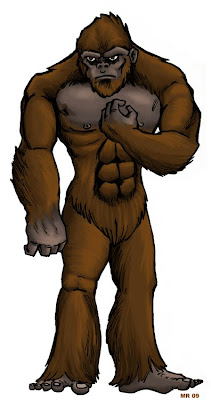 Sasquatch is a large primate that dwells in the American Pacific northwest, where large amounts of undisturbed forest still remain. Reports of such a beast go back to Indian folktales and persist all through America's history. Sasquatch (otherwise known as Bigfoot,) is typically described as extremely tall (7 - 13 feet,) covered in shaggy hair of a brown-reddish color, walking upright, and combining many features between humans and apes. The nickname "Bigfoot" comes from the creature's unusually large foot size (up to 20 inches,) as footprints are usually the only remaining evidence after a sighting. Although there have been sporadic reports of people who have been attacked or even abducted by the creature, generally they tend to shy away from humans, and will leave the area quickly upon being sighted.

This would still not stop me from running if I were to encounter one.
Posted by Hawanja at 8:02 AM