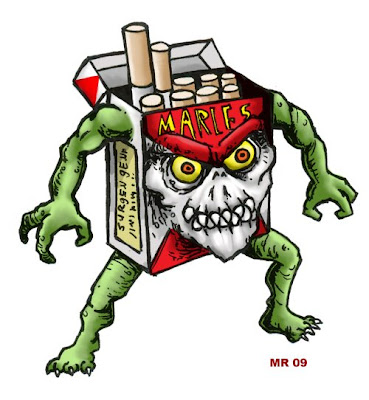 The hideous creature known as the Marles Man began life as a corporate marketing ploy. In an attempt to erase bad P.R. the Marles tobacco company commissioned a series of children's television programming starting a hero based on Marles brand cigarettes. A freak accident involving lightning bolt and chemistry set somehow brought the rubber Marles suit to life, and mutated it into it's current freakish, skull-faced visage. The Marles Man now spreads fear, hiding in children's closests and under beds, a living reminder that inhaling smoke in no way is healthy for you.
Posted by Hawanja at 8:15 AM