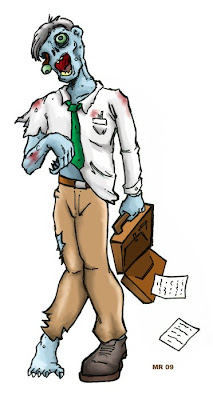 The Zombie originated in African / West Indian folklore, when a voodoo priest would seal someone's soul into a clay jar as a way of enslaving them. It turned out this practice of zombie slavery had roots in reality - in Haiti the act of zombification involved inducing a death-like coma with a rare drug. The victim would be believed dead and thus be buried, when later on the perpetrators would dig the affected person up and force them into labor. Victims of the zombie racket would find themselves shunned by their superstitious family and friends, with no where to go except to submit to the will of their captors.

In modern fiction, zombies have become the mindless animated corpse of a person, brought back from the dead in an animalistic state, who's only purpose is to wander around slowly and consume the flesh of the living, especially the braaaaaiiiiinnnsss..... They are usually brought back in masse, have limited intelligence or memory of thier former lives, and can be dispatched with a shot to the head.
Posted by Hawanja at 8:13 AM