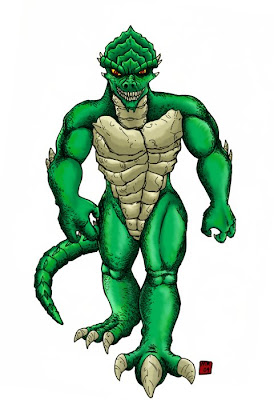 Rumors of Reptilian humanoids began emerging upon the UFO abduction scene in the early 1990s. They are described as between seven to nine feet tall, with a huge muscular frame, clawed hands and feet, glowing red eyes, and sometimes even wings. They are generally seen as working behind the scenes, in command of a smaller species of Alien Grays (although details are fuzzy on this point.) Researchers such as David Ike claim that the highest levels of the world's governments have been infiltrated by shape-shifting reptilians, and that many of our world leaders are in fact reptiles in disguise.

Actually, that would explain a lot of things really...

Alien Grays
Posted by Hawanja at 8:50 AM