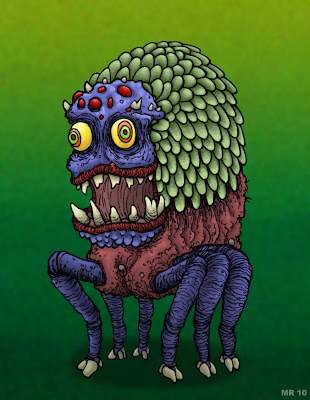 The Aranarchix is a large, scaled beast mutated from a breed of ground dwelling insect. The creatures are capable of consuming prey twice it's size. Powerful leg muscles allow the Aranarchix to leap dozens of feet into the air. True to their insect evolution they will often live in colonies, which have been known to migrate according to weather patterns and attack human settlements. Programs to exterminate the Aranarchix have so far been unsuccessful, as their breeding rates keep populations high.
Posted by Hawanja at 11:56 AM No comments:

The Thing Under the Bed 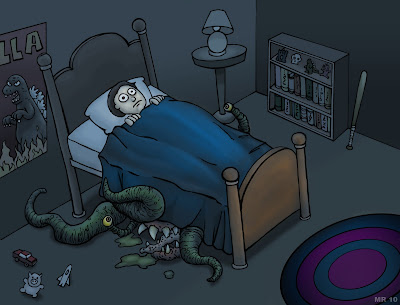 As a child, I was never really afraid of monsters under the bed.

I was more afraid of aliens.
Posted by Hawanja at 9:13 AM No comments:

Freak in the Box 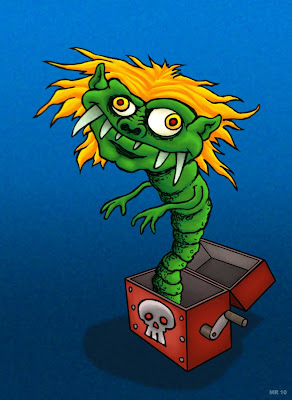 Not your classic children's toy.
Posted by Hawanja at 9:54 AM No comments:

The Countess of Blood 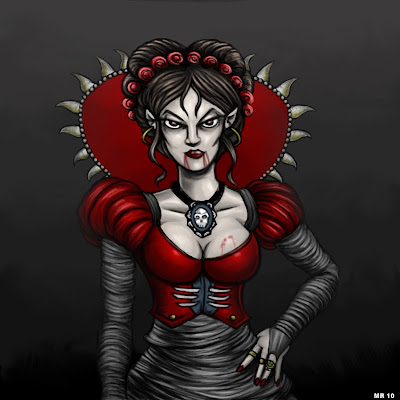 Ezliabeth Bathory was a Hungarian Countess, who is alleged to have tortured and killed over six hundred victims, the majority of which were young peasant girls. Legends arose of vampiric behavior, such as her drinking and bathing in the blood of young virgins to retain her youth.

By 1610 when Bathory began to prey upon the daughters of lesser nobility public outcry became so great that she was finally apprehended. Her four servants were brutally tortured, imprisoned, and executed (including having their fingers ripped off, beheaded, then burned at the stake.) As a member of the nobility Elizabeth herself escaped execution, but spent the last four years of her life walled up in a set of rooms, with no human contact, until she finally died. Local legend maintains she arose as a vampire after her death.
Posted by Hawanja at 9:33 AM No comments: 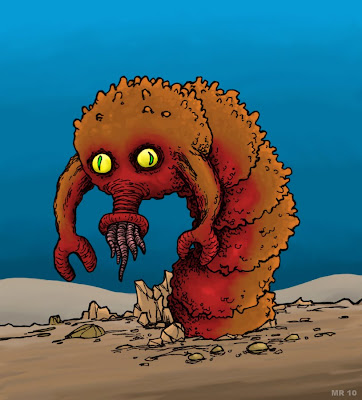 Skiziquitz are sentient worm-like creatures which live in large hollowed-out underground complexes. They are quite intelligent, and have developed an advanced society with a very complicated caste system. As they share their planet with several other aggressive sentient species, the Skiziquitz prefer to remain isolated when possible. The word "Skiziquitz" in their language means "The long ones."
Posted by Hawanja at 9:16 AM No comments: 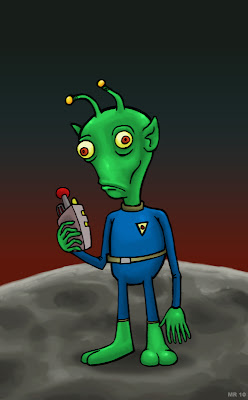 The Glbloort are a race of curious explorers, charged to explore the universe and catalog the various stars, stellar phenomena, planets, and the creatures upon them. They have a very advanced culture with high art and technology. Glblorrts tend to remain neutral during any type of interstellar conflict, but have been known to take sides to preserve rare species.
Posted by Hawanja at 11:09 AM No comments: 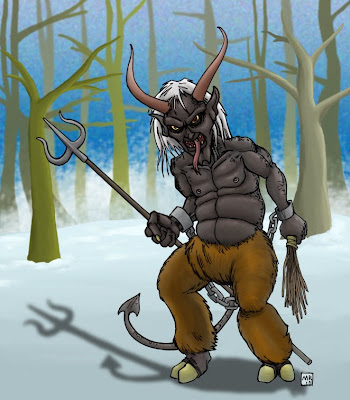 Krampus is a sort of anti-Saint Nicholas, who instead of rewarding good children with gifts and sweets, punishes the naughty children on Christmas. He is traditionally depicted as an evil, horned demonic figure, manacled with rusty chains and carrying a switch made from dried twigs to administer beatings. In many alpine countries young men dress up as Krampus to scare little children.
Posted by Hawanja at 10:46 AM No comments: 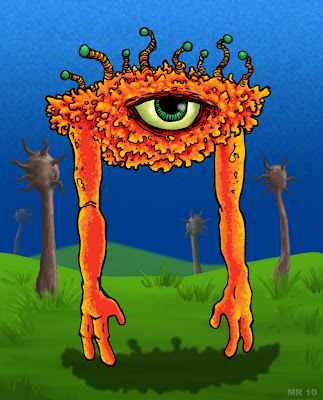 The Quazzaim are a race of highly intelligent creatures with very advanced psonic abilities. They come from a planet with very low gravity, and float via a means of a form of telekinesis. The mental demands this power places upon them increases with stronger gravity, thus they are often seen off planet wearing a type of gravity harness. The Quazzaim are pacifist scientists and philosophers for the most part, and tend to mind their own business.
Posted by Hawanja at 12:16 PM No comments: 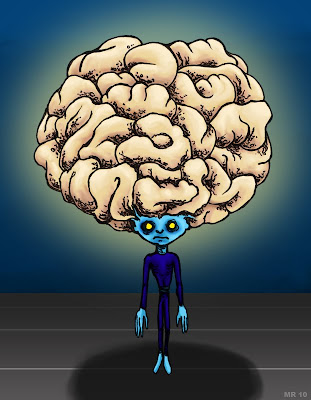 Brain Lords are humans who have used to genetic engineering over generations to yield larger and larger brain sizes. The result of their hideously large gray matter is a super genius level intellect along with the acquisition of several different psychic powers, such as telekinesis, psychokinesis, telepathy, precognition, and so on. Brain Lords often become megalomaniacal in their thirst for power.
Posted by Hawanja at 9:06 AM No comments: 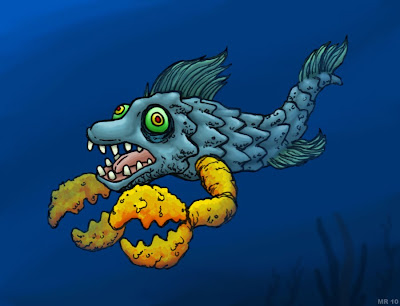 The Fiklabb is a strange mutant hybrid between a type of ancient shark and giant Alaskan king crab. The creatures are a result of mutations from illegal toxic waste dumping off the coast of Alaska by private energy companies in collusion with a corrupt governor looking to develop Alaska's protected coastal wildlife areas. Fiklabbs are now blamed for dozens of deaths per year, as the huge claws seem perfectly adapted at plucking the stray fisherman or passenger off of passing watercraft.
Posted by Hawanja at 9:39 AM No comments: 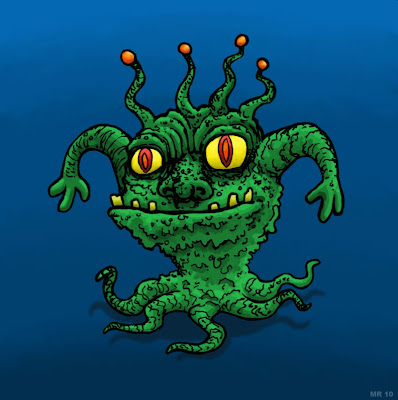 Ichloogies are creatures evolved from colonies of bacteria. Their very simple, skeptical skeletal and organ structures are covered in a shifting layer of mucus which allow the Ichloogie to change it's shape. They are able to grow any number of limbs, tentacles, etc, as well as squeeze thorough small openings. Ichloogies are considered "disgusting" by many other races and generally tend to be social outcasts when not among their own kind.
Posted by Hawanja at 9:53 AM No comments:

The unnatural result of a mad warlock's tampering with the forces of nature. Tiger Squids were created to act as guards or sentries. As word of the bloodthirsty beasts spread and they became popular with rulers and despots. Trade in the savage creatures spread them world wide.
Posted by Hawanja at 9:33 AM No comments: 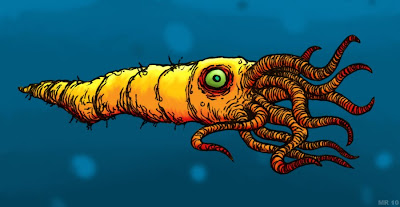 Karrakotas are overlarge squids. They are known to travel in schools and prey upon dolphins and small whales. They display signs of high intelligence, including elaborate social hierarchies and mating rituals. Old fishermen describe organized raids on shipping and coastal towns by the creatures, but most today consider these mere legends.
Posted by Hawanja at 11:31 AM No comments:

The Kluddities are a race of short, bulbous, plant based life forms. The creatures have no mouths (as they eat through photosynthesis) but instead communicate through a limited form of telepathy. Kluddities are generally peaceful, but will vigorously defend their territory against intruders.
Posted by Hawanja at 9:11 AM No comments: 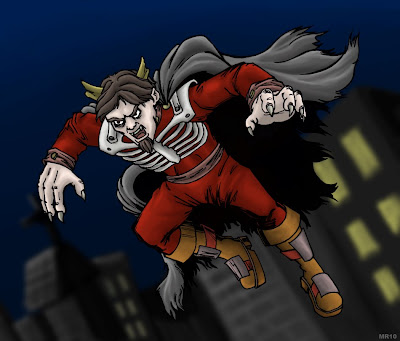 Spring Heeled Jack seems to be an early prototype for a supervillain. He's described in reports from the 1840s onward as a man wearing a suit made of oil skin with some kind of armor or metal corset, depicted in artwork of the time as resembling a rib-cage. The reports give him various supervillian powers, such as leaping over tall walls and buildings, breathing fire, possessing glowing red eyes, or disappearing into thin air. Yet despite his horrid appearance and supernatural abilities, and his multiple attacks on dozens of people over sixty years, Spring Heeled Jack has never actually killed anyone.
Posted by Hawanja at 9:38 AM No comments: Lhamperites are holdovers from the Cambrian age, recently discovered in a secluded underground lake. They are a form of life seemingly unrelated to any other. Lhamperites start out at a microscopic size but have been observed to grow to more than 12 feet in length. Despite measures taken to quarantine the dangerous creatures several sightings of Lhamperites have already been reported in the wild.
Posted by Hawanja at 9:44 AM No comments: 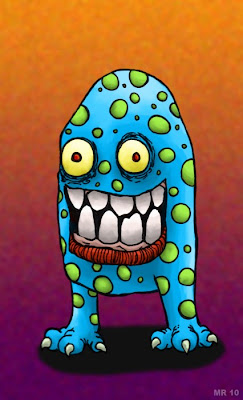 Sklubbs are freakish beings evolved from extra dimensional blood sucking parasites. It has been theorized that their bizarre appearance is merely a perception of the parts of themselves that are reflected in this dimension. Victims of Sklubbs seem to have no physical injuries.
Posted by Hawanja at 9:48 AM No comments: 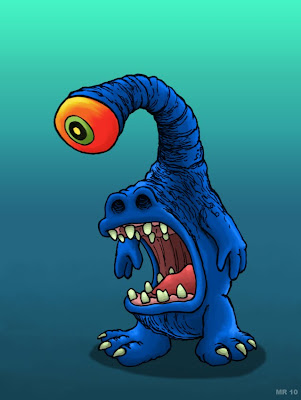 Stalqugulpus are bizarre offshoots of the Gulper family. The single eye on a long stalk is specifically adapted to spot prey over tall grasses or foliage.
Posted by Hawanja at 9:34 AM No comments: 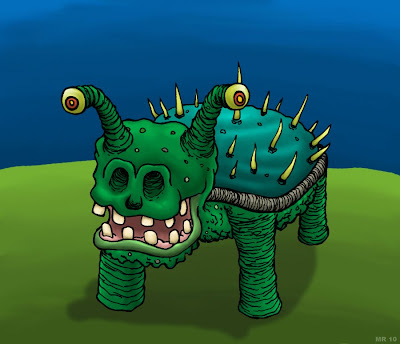 Turtle Slugs are scientific chimeras, genetically engineered by the Cristix corporation for the designer pet market. Although they were significant sellers, they soon lost popularity as most children found them slow moving and "boring."
Posted by Hawanja at 9:36 AM No comments: 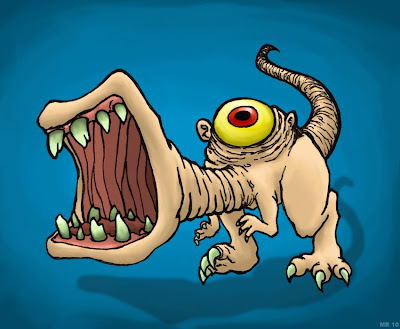 The Luscuobocca are skiddish, energetic creatures which live in short burrows among the forest floor. Individually the creatures are rather harmless, as they never grow more than 22 cm from tip to tail. They have been observed hunting in large parties of 40 or more, easily taking down and devouring prey many times their size.
Posted by Hawanja at 11:03 AM No comments:

Bump Snakes are so called because of the large amounts of small, strange bumps which cover the creature's back. These bumps are actually part of the Bump Snake's reproductive process. As a species they are genderless, at the appointed time the small bumps develop into larger "pods," which then break off and float away in the wind, each to develop into a juvenile Bump Snake. This method of reproduction has allowed the species to cover a large portion of it's native planet.
Posted by Hawanja at 3:49 PM No comments: 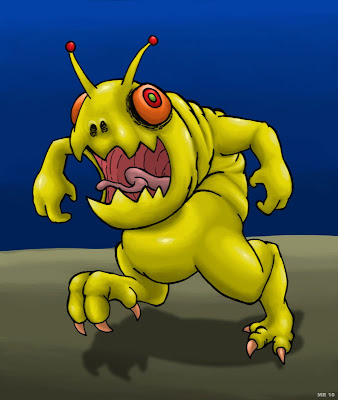 The Phibbilexes are a race descended from soft-bodied insects. They live in giant hive like constructs, in highly ordered societies. Each member is born into a caste which they live the entirety of their short lives. The whole is ruled by a "queen" who is specifically evolved for breeding purposes, though the members of the lower castes do enter into non-reproductive social relationships.

The Phibbilexes have one of the most complex languages ever discovered.
Posted by Hawanja at 9:07 AM No comments: 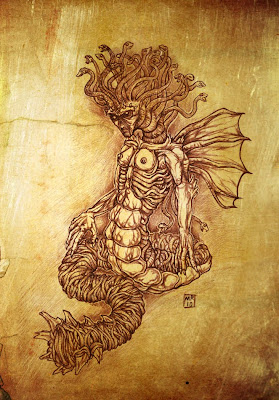 The Abyzou is a female demon in the folklore of the middle east. She is blamed for miscarriages and sudden infant death syndrome. In the Testament of Solomon she is described as is described as having a “greenish gleaming face with dishevelled serpent-like hair," and that she wanders the Earth looking to strangle newborns.

The Abyzou was often depicted on magical amulets, designed to ward her away from newborns.
Posted by Hawanja at 9:50 AM 1 comment: 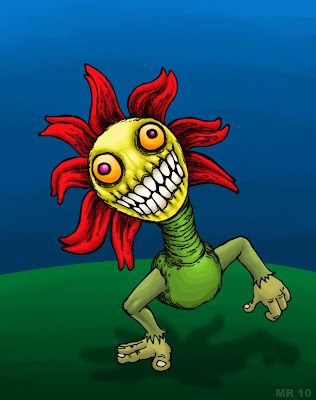 Skull Flowers are in fact animals that have adapted a bright, flower-like head crest in order to attract prey. They are so named because of their large skull-like grin. Skull Flowers hunt by disguising themselves as ordinary (if not large) flowers, then grasp prey with their front forelimbs.
Posted by Hawanja at 9:09 AM No comments: 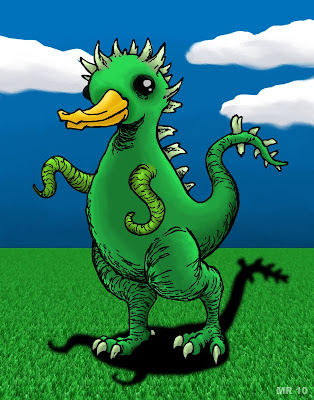 The elusive Duck Billed Tentacle Raptor is a rare creature indeed. The only evidence for the creature's existence is a blurry, shaky, badly edited youtube video shot by a former drug addict with a stolen cell phone. In the video the creature seems to have a strange metal strip running along it's back ridge plates and an oddly clumsy gait.

Is the Duck Billed Tentacle Raptor real? We may never know.
Posted by Hawanja at 9:27 AM No comments: 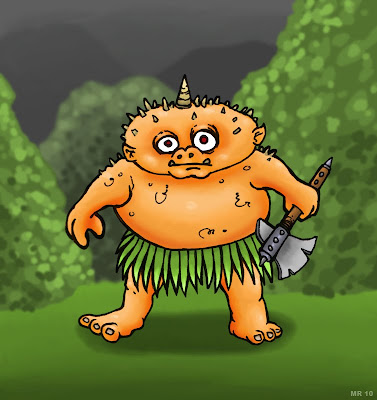 Scroblins are a wild offshoot of Goblins which live on a far away island. They live in a loose association of tribes that constantly war with each other. Despite their warlike culture the Scoblins have been known to band together to repulse common threats
Posted by Hawanja at 9:15 AM No comments: 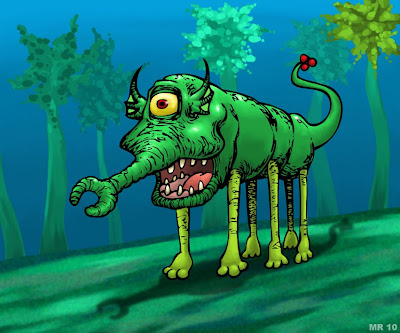 The Wuggabelly is a peaceful, grazing herbivore, with similarities to terrestrial bovines. The creatures measure up to 12 feet at the shoulder. Lower planetary gravity allows the Wuggabelly to support it's massive frame on six skinny legs.
Posted by Hawanja at 12:17 PM No comments: 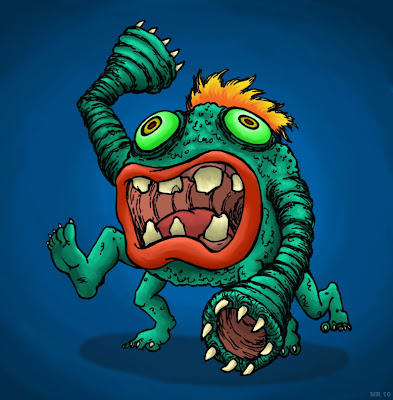 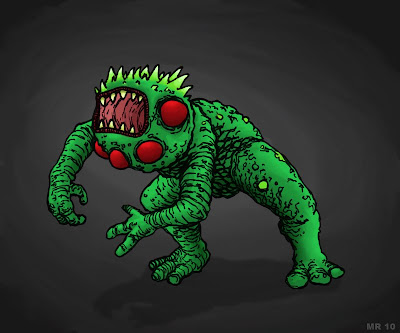 The vile creatures known as "Devourers" are decrepit, shadowy beings who live on the fringes of our dimension. They are capable of phase-shifting into and out of our reality to attack prey.
Posted by Hawanja at 9:39 AM No comments: 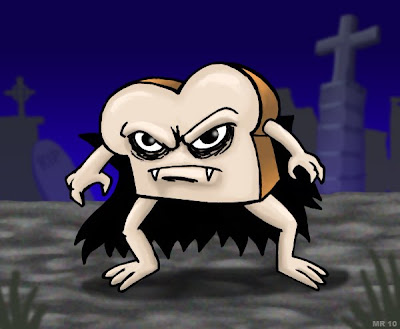 He wants to suck your blood...
Posted by Hawanja at 9:32 AM No comments: 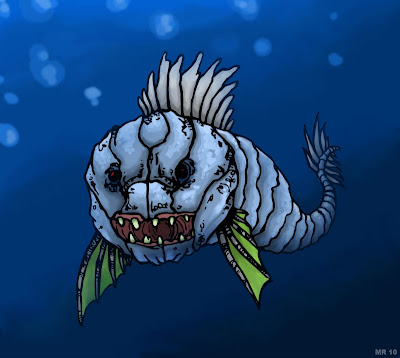 Terrocanlyth are massive predatory fish, measuring up to 20m (60 feet) from head to tail. They are covered in bony plates which protect from the bites of other Terrocanlyths, as well as the thrown harpoon. The huge creatures have been known to stalk and capsize fishing and whaling vessels to get at the meat inside.
Posted by Hawanja at 8:54 AM No comments: