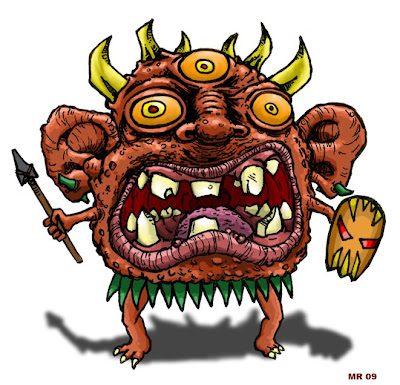 The Trigymmies are a bizarre race which inhabit a secluded Indonesian island. Thousands of years of inbreeding crossed with random mutations from naturally occurring island uranium deposits have created a genetic offshoot from the human race. At a mere 24 inches in size the average Trigimmie comes only to knee height on a normal human. The face and head now encompasses the whole of the trunk. Arms and legs have shrunk in size but still remain strong. Strange horns have sprouted from the head, and seem to increase in number and size with age. Most strange of all is the addition of a third eye in the middle of the forehead, which most likely evolved as a defense mechanism against the island's large predatory birds.

Despite their bizarre appearance Trigymmies are still part of the human family. They are able to produce viable offspring with normal human beings, and are in the habit of abducting women from neighboring islands to restore their depleted genetic stock. They are generally peaceful but wary of outsiders.
Posted by Hawanja at 10:20 AM