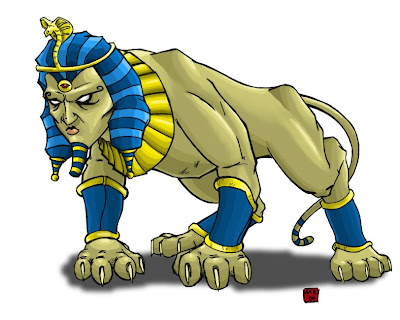 The Sphinx is a composite animal made of up a lion's body with the head of an man, eagle, or ram. In ancient Egypt statues of the Sphinx were used as temple guardians, the most famous of which is the Great Sphinx of the Giza plateau. Rulers would often have their own heads carved onto the heads of Sphinx statues to gain favor with the gods. The Sphinx began appearing in the artwork and mythology of other nearby cultures, including Greece, India, and Mesopotamia.
Posted by Hawanja at 8:03 AM