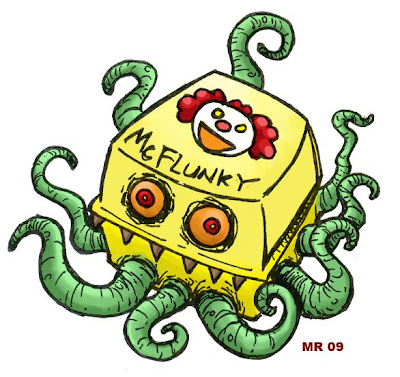 In 1985, the Spunky McFlunky fast food chain first introduced Squid McNuggets. The highly processed breaded seafood was a smash success, and was single handedly responsible for fundamentally changing the way squid was consumed in North America.

Unbeknownst to all the McFlunky corporation is the cover for a vast underground terrorist organization headed by the evil clown master Spunky McFlunky. The McFlunky Squid McNugget was merely phase one in a multi-phase plan for world conquest. Phase one is to gain the public's trust and get them to allow Squid into thier homes. Phase two involves fifty foot tall genetically engineered indestructable McFlunky Squid McNugget monstrosities crawling over the landscape and subjagating mankind.

Comes with Sweet and Sour sauce or Honey Mustard, in six, nine, or twenty packs.