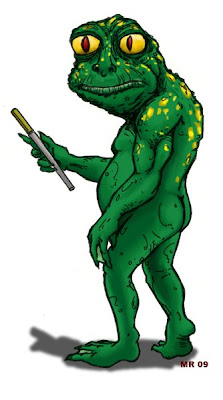 The Loveland Frog man is a four foot tall humanoid with the face of a lizard or frog, first spotted in Loveland Ohio in 1955. (For those of you keeping track, this is also the same year of the Kentucky Goblin incident.) They are described as scaly, with wide mouths, wrinkles on their heads. Later descriptions mention "wet hair" on their bodies which showed texture (a garment?) as well as a "possible tail." There have also been descriptions of a wand-type object which expels sparks and leaves the smell of almonds behind.

The Frog men have been seen in 1955, 1972, and again in 2000, all around the same general area of Loveland, Ohio. There was also a report of similar creature in the Dominican Republic in 1988 which may be related.
Posted by Hawanja at 8:15 AM