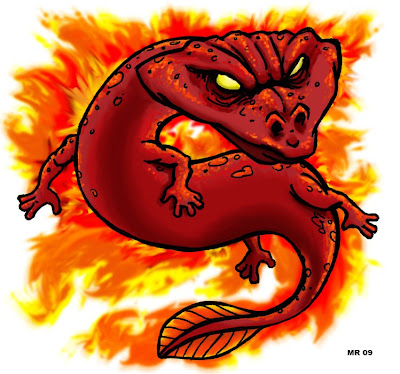 In times past the Salamander was associated with the element of fire. References to the Salamander as a fire elemental go back to antiquity, and was common by the middle ages to use ingredients derived from Salamanders in alchemical potions and the like. Their skin was supposedly so cold it could put out fire.

This association of the Salamander to fire may have been born from observations of a piece of wood being burned in which a Salamander just happened to be hibernating, as the creature would crawl from the wood it would appear to be "born" from it. Certain species of Salamanders also excrete toxic milky substances from their skin when threatened, which may have lead to the belief they could withstand the flames.
Posted by Hawanja at 9:40 AM