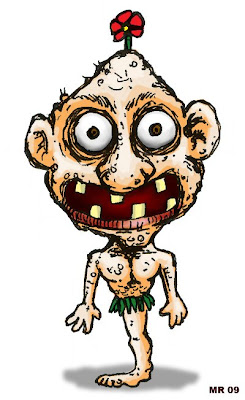 The boy who would be known as One-Legged Jack was born with a strange birth defect. Both legs are fused together below the torso, but unlike other suffers of Mermaid Syndrome there is only one foot at the end. Jack as the ability to rapidly hop with his one leg, attaining speeds faster than a normal running man. Through the years he's also developed an extremely keen sense of balance.

Jack suffered constant harassment as a child, and eventually ran away to join the circus. Along with his friend Serpenzo the Serpent boy he travels the country as a one-legged tightrope walker.
Posted by Hawanja at 7:53 AM