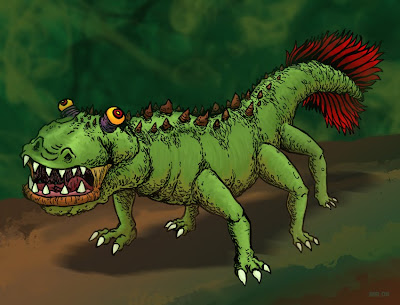 The Archadon is a giant, prehistoric, six-legged amphibian. Long thought to be just an urban legend, an expedition by a devoted group of cryptid hunters have finally turned up a relic population of the beast in a secluded Florida swamp. As the creature shows many features found no where else in the fossil record (six legs for example,) many scientists believe it shows evidence for extraterrestrial tampering in Earth's evolution.
Posted by Hawanja at 9:25 AM