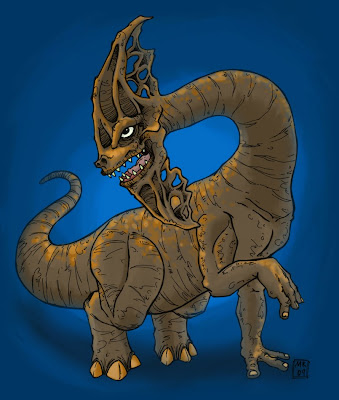 Moonbacks are sentient beings evolved from large, sauropod-like reptiles. Although they possess highly developed skills in physics and mathematics, they generally eschew advanced technology and prefer to live in a pastoral lifestyle, maintaining the giant herds that roam their planets much like their ancient ancestors. Due to their large size (30 feet,) vast physical strength, and above average intelligence they are often abducted and sold into slavery by other races. The multiple incursions by slave raiders and others have recently spurned the Moonbacks into developing defensive systems.
Posted by Hawanja at 6:47 AM