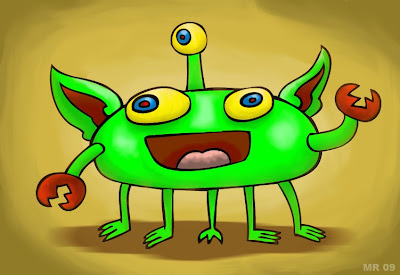 MeMeMeeps are among the most dangerous life forms in the galaxy. What appear to be small, cute little squeeky things have been a plague on civilized worlds for eons. MeMeMeeps are tiny little eating machines, and each make a distinctive "meep" sound. They are of limited intelligence but in large groups seem to share a hive mind. MeMeMeeps have the ability to hypnotize most sentient life forms, forcing it to do their bidding (which usually revolves around feeding.) Once a MeMeMeep matures it will graft itself into it's host's body, usually directly into it's brain. Millions of spores then infect the host, which eventually busts into millions of MeMeMeep larva.

After centuries of effort most of known space has been cleansed of the MeMeMeep threat, although some less than educated populations keep them as pets.
Posted by Hawanja at 11:00 AM