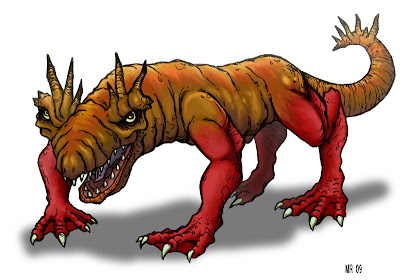 The Urodeliac is a large, voracious, amphibian resembling a salamander. They are known to grow in excess of 20 feet long. The horn-like protrusions around it's head are motion sensing organs, which detect subtle changes in air and water currents in order to compensate for the creature's poor eyesight. A century ago the all known populations of Urodeliac were hunted to extinction, but sightings still randomly occur around the globe.
Posted by Hawanja at 10:36 AM