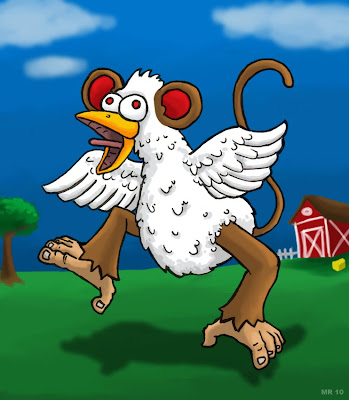 The result of a bizarre experiment by a small time farmer to strengthen his dwindling chicken stock. Chicken Monkeys became a national phenomenon. Easy to raise, fun to train, soon every kid in America had their own Chicken Monkey pet. The export of Chicken Monkeys became a highly profitable business, although many animal rights organizations advocate to ban their export when it was learned they were being used as a food source in other countries.
Posted by Hawanja at 9:07 AM