The Green men of Barsoom 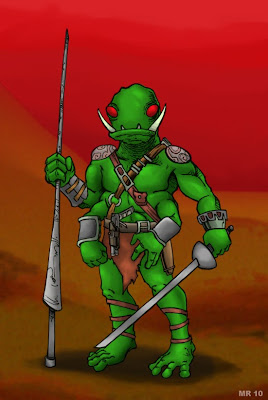 The green men of Barsoom are a race of large humanoids which inhabit Barsoom (Mars) in the a series of novels written by Edgar Rice Burroughs. They are described as between ten to twelve feet tall (in some instances as much as fifteen feet,) have four arms, and a deep green skin. Their eyes are large and red, and protrude from the side of the head. The males have large curving tusks. They are savage and primitive, have no sense of family, and share everything in a communal society. They are named after the abandoned cities which they inhabit, and are constantly at war with one another and the other races on Mars. The "hordes" of green men are typically named after the abandoned cities which they inhabit, Tharks, Warhoons, etc.
Posted by Hawanja at 4:16 PM