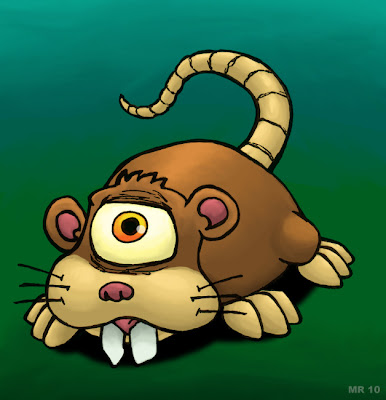 Ratclopes are strange, one-eyed rodent mutations that suddenly appeared in central Asia but have quickly spread outward, and have now been spotted on five continents. They are capable of growing up to 3 feet long (including tail) and eat twice their body weight a day. Given proper weather conditions, Ratclopes will spawn by the millions and devastate crops and farmlands. Unlike other rodent species they are highly aggressive, and when food is scarce have been known to attack dogs, cattle, or even people.
Posted by Hawanja at 9:48 AM