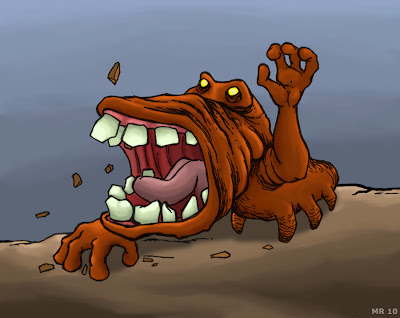 Mudeaters were originally artificially created creatures made by splicing together canine, caterpillar, baboon, and earthworm DNA. The creature has the ability to rapidly tunnel through the Earth, and took to living in large warrens of several dozen individuals. Despite their fierce appearance they are quite harmless, and subsist on a diet of small insects, rodents, and other assorted organic matter which litters the forest floor.
Posted by Hawanja at 9:21 AM