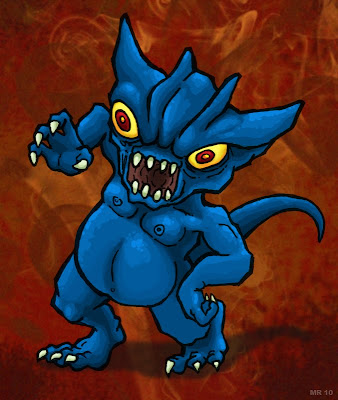 The Twisted Ones are a clan of imps which have escaped from servitude and have gone "wild." Thousands of years in Hell's oppressive wilderness have warped these creatures into mindless eating machines, which other demons consider little more than vermin. While the development and population of normal Imps are held in check by more powerful demons, these Imps have no such constraints. Every once in a while the conditions will be just right, and the Twisted Ones will suddenly multiply by the millions and swarm over Hell's cities. During such times the multiple factions which are constantly warring for control of Hell will bring a momentary truce to the conflict to suppress the Twisted Ones and exterminate them.
Posted by Hawanja at 12:50 PM