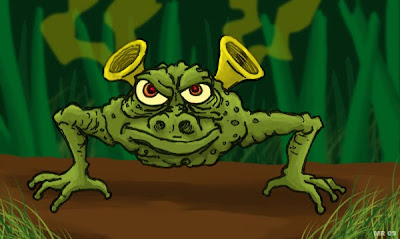 The Bufo Smellahollic, better known as the "Stink Frog," large species of highly specialized frogs. The prevailing theory is that they are evolved from a mixture of rare amazon poison frogs which were bought as pets but escaped into the sewer systems of large cities. The forelimbs of the creature have tripled in size and are used for a bowlegged form of locomotion while the hind legs have all but disappeared. The ears are no longer merely instruments for hearing, but have evolved into strange, cone-like protuberances that secrete an odorous funk, used to mark territory and as a defensive measure.
Posted by Hawanja at 9:36 AM