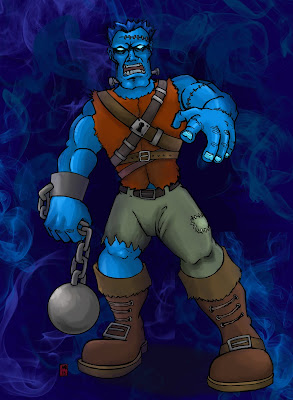 The ghoulishly strong monster created by a mad scientist in 1818, the Frankenstien's monster was never given a name in the official narrative. The creature is not described much beyond being large, ugly, and ogreish. The process by which he is created is not described in detail either, although it is hinted that various raw materials (including body parts) are included. Much of what has become the modern version of the monster (i.e. the flat head, prominent brow ridge, bolts in the neck, zombie-like locomotion, largely inarticulate groaning, green skin, etc) comes from the 1931 Universal film.
Posted by Hawanja at 9:51 AM