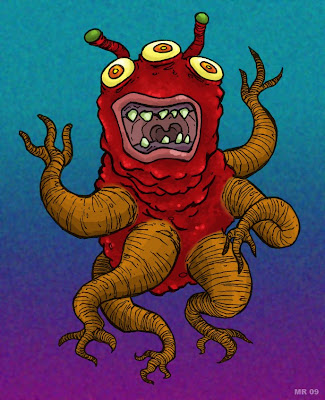 Scaphalites are strange alien creatures which have adapted to life in the vacuum of space. It is believed that within their bodies are special organs which transform various inert gasses along with starlight into oxygen, similar to photosynthesis in plants. They make their homes in small villages on and within large asteroids in territories unclaimed by any galactic powers.

There exists in certain solar systems ruins of vast cities and temple complexes which have long since been abandoned. The Scaphalites of today have various legends about cataclysms in the past which have driven them from their ancestral homes.
Posted by Hawanja at 11:04 AM