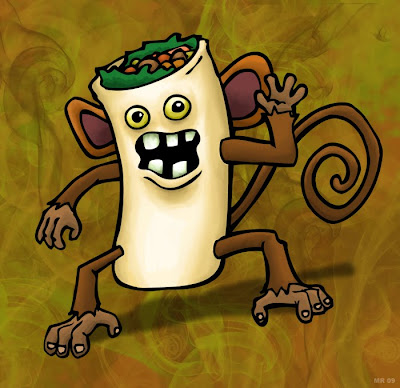 Burrito Monkey started his life as a common spider monkey in the San Diego zoo. A one-in-a-million accident involving a toxic waste spill and a microwave burrito mutated him into his present form. Imbued with superior strength, agility, and intelligence (for a monkey,) Burrito Monkey now protects the citizens of San Diego. In addition to fighting crime he's also a staunch environmentalist and animal rights activist.

He also sees nothing wrong with eating burritos, despite being one himself.
Posted by Hawanja at 9:44 AM