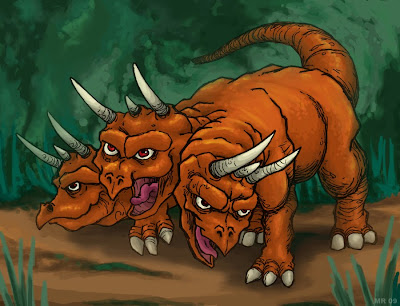 A Ceratopian dinosaur with three heads. The Triasaurus lives in deep jungles Africa, where local tribes revere it as a God. Legends of the creature go back at least 1000 years. In the 1850s several expeditions were lead to hunt the monster down, as it was blamed for extensive livestock losses in the area. Witnesses describe bullets bouncing off the creature's thick hide. Modern reports have become increasingly sporadic, leading some to speculate it has gone extinct.
Posted by Hawanja at 7:52 AM