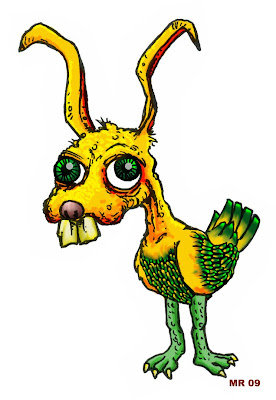 Part rabbit, part chicken. Like the Onionpus this creature was developed in a laboratory to help ease world hunger, an attempt that has backfired. Although it's meat is reportedly incredibly tender, most of the world's major religions have designated this animal as "unclean," thus many in the starving developing world won't eat it. In addition the few specimens which have escaped into the wild have outbred and displaced local rabbit populations and have become a virtual plauge for farmers.
Posted by Hawanja at 8:10 AM