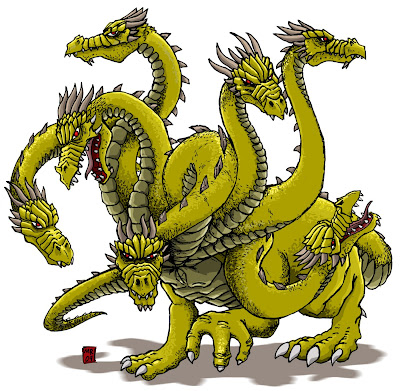 The Hydra was a huge, multi-headed dragon, the guardian of an underwater passage to the Underworld. The Greek demigod Hercules was tasked to kill the Hydra as one of his twelve labors. As he decapitated each head another grew in it's place, it wasn't until he cauterized each stump that the beast was finally slain. Hercules dipped his arrows in the Hydra's poison blood, and the pollution caused by this act made all of the fish in the river Anigrus inedible.
Posted by Hawanja at 8:14 AM