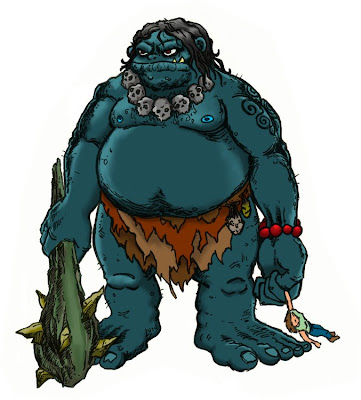 Stories of giants are common to mythologies the world over. They are depicted as human beings of immense size, ranging from hundreds of feet tall (the Greek Gigantes,) to slightly larger than normal (Goliath of the Bible.) Usually giants are cast as the enemies of various Gods, a primordial force that must be conquered for mankind to develop. In North America the creation of many natural features are ascribed to giants, while in Europe tradition maintains that giants created the various megalithic sites such as Stonehenge. Giants have survived through the ages in folk stories and fairy tales, and are now a common adversary in popular fiction and role playing games.
Posted by Hawanja at 10:37 AM