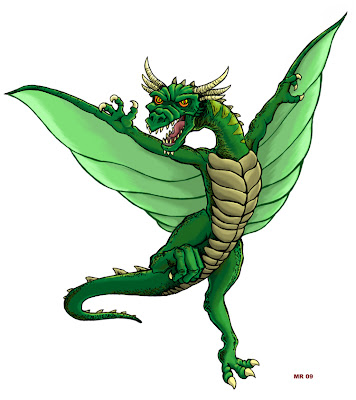 Dragons are large reptilian beasts that are known to cultures the world over in one form or another. The actual morphology of the dragon differs as much as the culture in question. Dragons can have two, four, or no limbs, be winged or wingless, live in caves or in the heavens. Unlike their Eastern Counterparts the Western Dragon is an embodiment of evil, and will slaughter villages, poison water sources, spew fire or venom, and demand virgin sacrifice. In the Middle Ages the dragon became a symbol for the forces of righteousness (in this case, Christianity) to defeat in order to preserve civilization. Folk tales are bursting with stories of such beasts dispatched by kings, knights, and even children. However the image of the dragon was also appropriated into the crests of several royal houses for it's strength and wisdom.
Posted by Hawanja at 11:45 AM