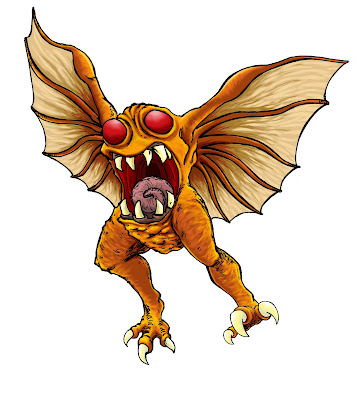 The Mothman is a strange, giant, winged creature that seems to be associated with accidents or large loss of life. These creatures seem to be benevolent despite their demonic appearance - they tend to show up around areas of pending disaster, as if trying to warn people of imminent danger. That being said, their method of communication seems to be scaring the bejesus out of people so they'll run away. However there are no cases of a creature actually physically harming anyone.

I imagine them as extra-dimensional entities, who's physical appearance in our dimension is flavored by the fears of the observer. Although no one seems to have gotten a clear look at them, the few features they all share (very tall, wings, large, glowing eyes) seems to be drawn on our own subconscious imagery of what "danger" would look like. This makes me wonder if this is intentional? Perhaps these beings are unable to communicate with us directly, so the next best thing is to assume an evil demonic shape and scare everyone away before the reactor goes critical? Mothman has been seen Chernobyl, at the World Trade center, and most famously at the Sliver Bridge on Dec.15 1967 as depicted in the Movie "The Mothman Chronicles."

However much I would like to think such a creature is benevolent, that would not stop me from running if I were to encounter one.
Posted by Hawanja at 10:57 AM