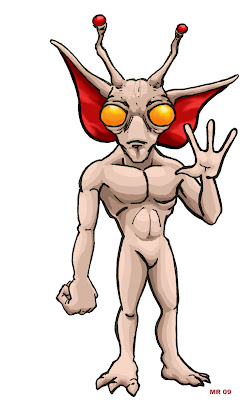 A bizarre, 3 foot tall, floppy eared creature, a group of which tormented the Sutton family farmhouse in Hopskinsville, Kentucky, on August 21st 1955. Firing on the creatures produced a noise like bullets ricocheting off of metal. For several hours sightings of the creatures in windows and doorways were met with shotgun blasts. The strange beings retreated once sheriff officers arrived, but returned briefly the next day. In addition a green light was seen in the woods along with other UFO activity.

I would hate to think that an advanced species flew all this way just to land at a farmhouse full of drunken slackjawed yokels.
Posted by Hawanja at 7:50 AM