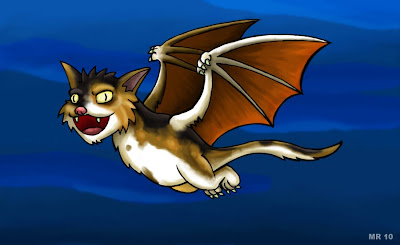 Kittahdactyls are bizarre mutations that just appeared one day around a city waste dump. There are allegations of improper waste disposal from several bio-genetic companies at the site which may have mutated local alley cats into the new species. Kittahactyls immediately became very popular to keep as pets, although most professional trainers find the creatures far too dangerous to domesticate.
Posted by Hawanja at 9:40 AM