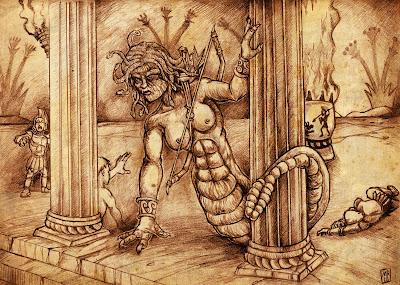 In Greek mythology, Medusa is one of the three Gorgons. In traditional mythology she his depicted with a head full of snakes, winged, and with a gaze that can turn those who look upon it into stone. She is beheaded by the hero Perseus, and her head is used as a weapon until it is finally given to the goddess Athena and placed on her shield. This image became a protective talisman known as the Gorgoneion.
Posted by Hawanja at 9:35 AM