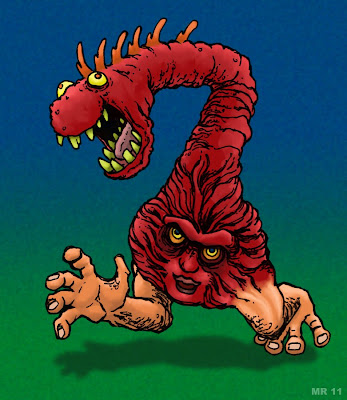 Nerve Runners are the result of parasitic organisms which radically alter a host's DNA, to the point where the creature soon becomes unrecognizable. Symptoms are begin enough in the beginning - headache, cough, runny nose. By the third day the body goes into wild spasms and sharp bolts of pain travel along the nervous system as the transformation begins. As the parasite begins to activate junk DNA in a host's cells multiple mutations may occur. A Nerve Runner may thus have any number of arms, legs, eyes, limbs, faces, etc. The entire body may be radically altered alongside occasional body parts which are relatively unaffected.

The host's mental state is another story. Most thus affected are driven hopelessly insane, often turning violent. It is theorized this is a mechanism through which the parasite spreads itself.
Posted by Hawanja at 12:19 AM