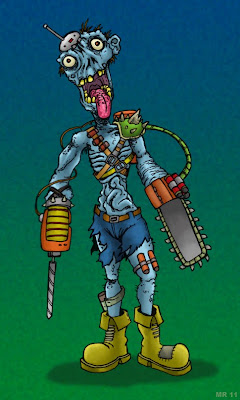 A necroconstruct is a semi-independent being constructed out of dead biomatter (usually corpses) along with various technological implants. As such they can come in any number of shapes or sizes, dependent upon only their creator's ability and imagination. Not zombies in the true sense (as they are animated by science instead of supernatural means) necroconstructs tend to show only the most basic of behavior and motor functions, and as such are usually used as guards, shock troops, or cannon fodder. The process of creating such abominations was originally developed for military use but was later abandoned as too expensive and unreliable. Necroconstructs are most commonly employed nowadays by gangs, druglords, and terrorist organizations.
Posted by Hawanja at 12:15 AM