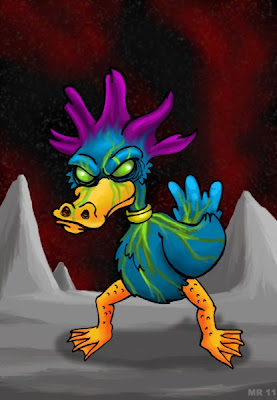 Cosmic Ducks are a race of higher dimensional beings who roam the universe, protecting the innocent and preserving sentient species from extinction. They are in fact descended from a flock of normal terrestrial ducks who were caught in a temporal vortex while migrating over the Bermuda Triangle. The strange extra-dimensional energies rapidly evolved the quacking avians into higher life forms that possess vast psionic powers. Cosmic Ducks take special care to isolate the Earth from terminal threats in the Galaxy.
Posted by Hawanja at 10:05 AM