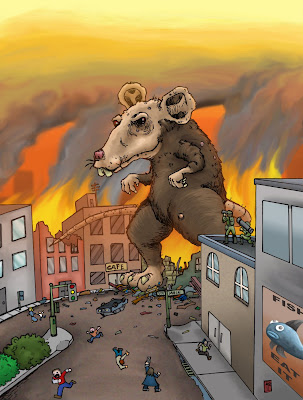 Lenny The Labrat was a subject of terrible and painful experiments, kept in a dingy cage, fed substandard food and generally lead a bleak, hopeless existence. Researchers began noticing a strange increase in body mass and intelligence after Lenny was fed an experimental dietary supplement. The growth continued exponentially until Lenny had increased in size by %5500 percent. Lenny escaped the lab, and began taking his revenge on the humans for their terrible mistreatment of him.
Posted by Hawanja at 1:01 PM