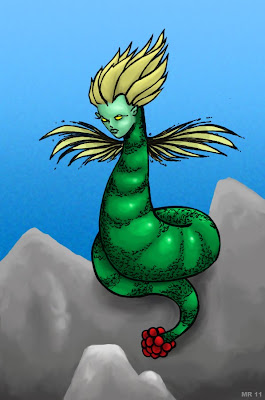 Lassu are strange creatures. They appear as serpents with feathery wings, a strange bulbous rattle, and an oddly human head. They have been known to display supernatural powers, such as mind reading, clairvoyance, teleportation, and the ability to fly though solid objects. They do not seem to be confined by the same laws of physics which govern the rest of the universe, leading some paranormal researchers to theorize they are multidimensional entities capable of moving outside of space-time. As to who they are and what their ultimate purpose is, no one can say.
Posted by Hawanja at 12:14 AM