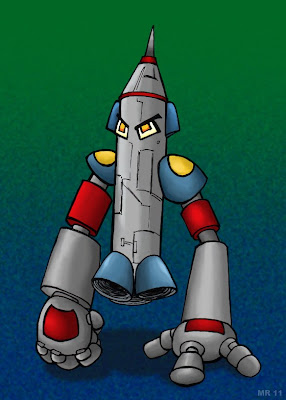 ICBM-X is an artificial intelligence created from the shell of a decommissioned Titan class intercontinental ballistic missile. ICBM-X was created by a Jose "Penuthead" Gonzoles, as his entry into his 7th grade science fair. Although he made it to the final round ICBM-X was passed over for the blue ribbon by Besty Bernhard and her genetically engineered super chickens. In his rage and Jealousy Penuthead reprogrammed ICBM-X to extract a horrible and bloody revenge, but the super chickens would not be defeated so easily. After a raging and horrible battle both ICBM-X and the Super Chickens would be disqualified, with first prize going to Wesley McGillis and his Styrofoam-coathangar solar system model.
Posted by Hawanja at 10:52 AM