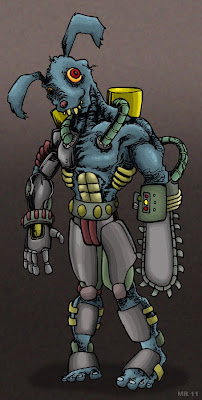 The freakish monstrosity known as BunnySaw started life as an experiment using different species gathered from a scientific expedition from an obscure planet on the edge of the galaxy called "Earth." The resulting clone was actually quite intelligent, however the entire operation was soon liquidated and all property sold. The clone eventually became the property of an unscrupulous fight promoter who had several cybernetic enhancements installed. BunnySaw was then entered into the Intergalactic Gladiator Federation. Like all gladiators BunnySaw must win 100 fights to procure his freedom.
Posted by Hawanja at 11:23 AM