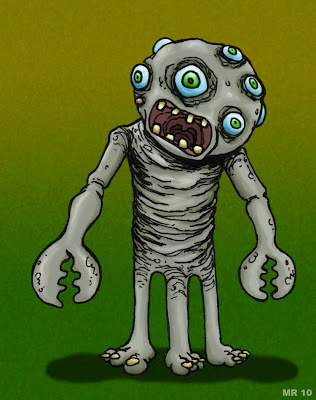 The Trumphaladon is a hideous mutant known to attack campers and hikers in the Pacific north west of the United States. Despite more than a hundred reports over the last twenty years, scientists have yet to obtain any concrete evidence of the creature's existence besides some blurry photographs. Rumors point to a undercover military experiment in a deep underground base which went out of control and subsequent cover up. Several witnesses say they have been harassed by strange men in black suits who urged them to forget their encounters.
Posted by Hawanja at 9:40 AM